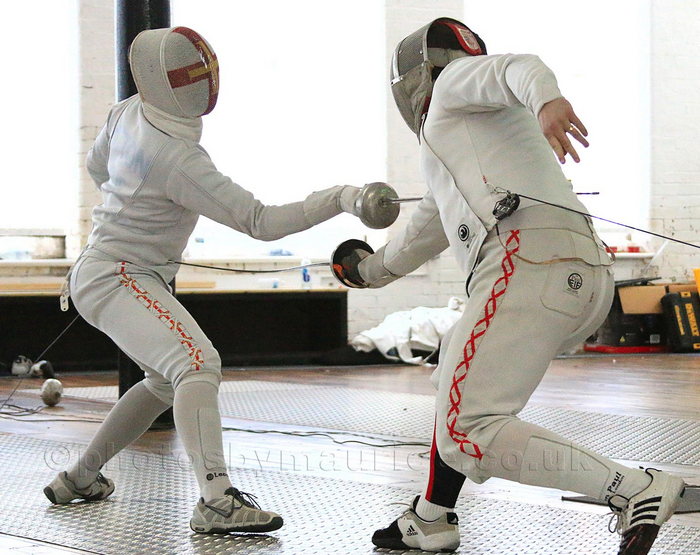 Modern competitive fencing, while it does still have roots in the classical swordplay of the sixteen and seventeen hundreds, has evolved into a new form reflecting the needs of the sport. While many “classical” fencers bemoan the current sport of fencing as having drifted too far from its roots of actual swordplay, but since swordplay itself has evolved over the years, you can view modern fencing as further evolution.

The sport of fencing is divided among three weapons, Foil, Epee, and Sabre. In each of the weapons, there are men, women and mixed events, and further divisions based on a ranking system base on performance in previous events.

Each of the weapons uses a different target area. With Foil, the only solid surface is the torso, front and back, but not including the head and arms. Hitting other areas results in an off target, which causes the action to stop.

Sabre also uses a restricted target area, above the hips including the head and arms, but hitting other areas of the body does not cause the action to stop. In Epee, the entire body, from the top of the head to the tip of the toe, is valid as a target. Foil and Sabre fencers wear special metal vests, called Lames, over their target areas to allow the weapons to know which areas they are hitting. 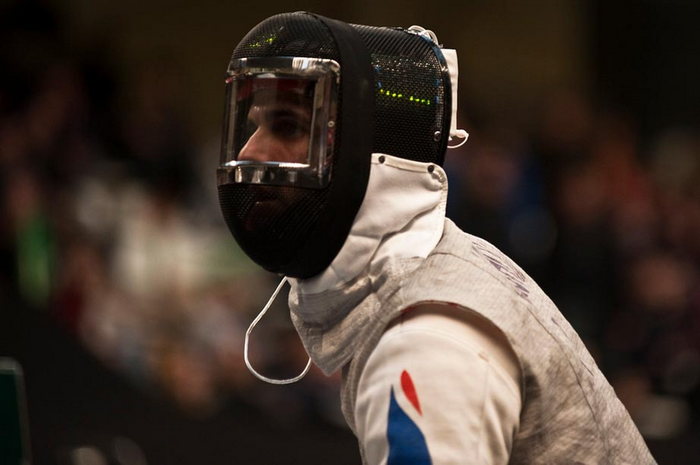 The weapons themselves reflect their different target areas. Foils are lightweight, with a small guard covering the hand and a thin blade. Sabres are also light, with a larger guard to cover the entire hand, which is a target area.

The ends of the Sabre blades are also thinner, allowing the blades to curve around and hit target areas. Epees are stiffer, and the heaviest of the modern weapons, with a large bell-shaped guard to cover the hand.

Modern fencing takes place on a strip, 14 meters long and 1.5 to 2 meters wide. Many competitions have metallic strips, so fencers hitting the floor by accident do not generate false hits. The fencers have a cable that runs from their weapon hand, though their protective jacket, and out the back. Foil and Sabre have clips that attach to the metal Lames.

The fencers than connect the cable to another one that runs to the back end of the strip to a box called a “reel,” which is just a spring loaded cable pull to keep the cables out from underfoot. The reels are connected with another cable to a scoring box. The Scoring box has four lights, a red one for points for the fencer on the left, a green one for the right fencer. There are also two white lights for the off-target hits in Foil.

Across from the scoring box, in a position to see both the lights, and the fencers, is someone called the Director, or referee. It is the director’s responsibility to start and stop the fencers, award the points, and assign penalties for dangerous or illegal actions. In Epee, the points, or touches, are simply whoever hits first. 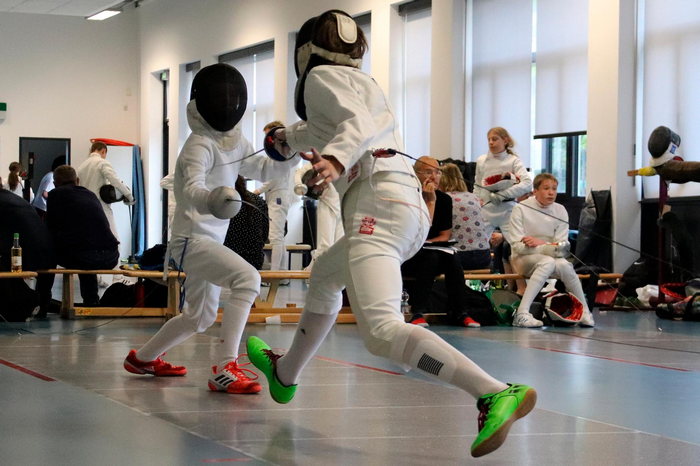 There is a slight delay (1/5 of a second) to allow both fencers to hit at the same time. The delay is longer for Foil and Sabre, and the Director’s job is to determine who should be award the point, based on a series of rules called Right of Way. Essentially, if you are being attacked you must first defend yourself before you can attack in return.

Fencing, in any of the weapons, can be very fast, but to the uneducated spectator rather dull with a few dramatic exceptions. Worse when a fencer does something dramatic, but his opponent is awarded the point due to the Right of Way rules.

One on one matches is often to 15 points, fenced in 3 five minute periods with two 1 minute breaks. If 15 points are not scores, then the highest score wins. Team formats are round-robin matches between teams of three fencers.

Fencing is one of the original events in the modern Summer Olympics, which started in 1896. Despite its long history, fencing comes under occasional fire as it is not spectator friendly. Several changes, allowing different color uniforms and face shields, allowing spectators to see fencer’s faces. It is unclear, yet, if these changes will have any positive effect on the sport.